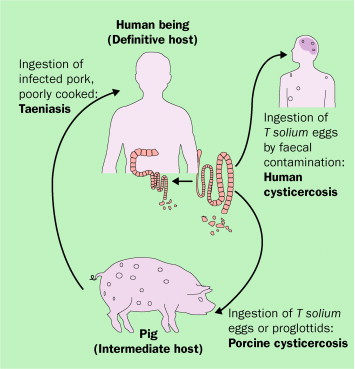 The most prevalent neurological parasite illness in the world and a key contributor to epilepsy is Neurocysticercosis (NCC). The majority of imported NCC cases in Europe are being reported from Spain. NCC is one of the rare diseases whose eradication is a priority because it is also prevalent in industrialised nations as a result of immigration and travel.

The larval stage of the porcine tapeworm Taenia solium is responsible for the parasitic infection known as cysticercosis. Cysticercosis affecting the Central Nervous System (CNS), including the brain parenchyma, meninges, ventricles, basilar cisterns, sulci, gyri, spine, and retina, is referred to as Neurocysticercosis (NCC). Ingestion of the eggs released by a tapeworm carrier cause infections in humans.

Its significant clinical variability is one of NCC's most difficult characteristics. The number, size, stage, and location of the cysticerci as well as the host's immunological response all play a role in the signs and symptoms of this parasitic disease. Headaches, seizures, hydrocephalus, meningitis, dementia, and other symptoms of space-occupying lesions are among the symptoms. Cysticerci, on the other hand, frequently result in asymptomatic infection and last for many years.

The most common parasite neurological illness in the world and the main contributor to acquired epilepsy is NCC. The total number of NCC patients, including symptomatic and asymptomatic instances, is estimated by the World Health Organization (WHO) to be between 2.56 and 8.30 million as of 2017. Most of Southeast Asia (Laos), part of China, most of non-Muslim sub-Saharan Africa, parts of the Caribbean (especially Haiti), parts of Central and South America (with the exception of Chile, Uruguay, and Argentina), the Indian subcontinent, and many regions of non-Muslim sub-Saharan Africa and parts of Eastern Europe are prone to infections.

For those residing in high-endemicity areas, NCC poses a major health risk. People from non-endemic locations are now more likely to contract this parasite disease due to increased travel and international commercial affairs. The diagnosis of patients brought into endemic nations is frequently delayed, they are expensive to treat, and they can result in secondary local transmission.

Due to increased mobility and travel over the past few decades, NCC has increased in prevalence in Europe. Cysticercosis is still transmitted sporadically in Spain. Additionally, it is the nation that has imported the most instances of cysticercosis into Europe. Because it houses the most migrants from Latin America in Europe, a recent analysis revealed that the NCC burden is significantly larger than earlier projections. Despite recent developments, there are still significant gaps in our understanding of the disease epidemiology in practise. The clinical, radiological, demographic, and laboratory characteristics of NCC patients identified and registered in the Spanish+REDIVI Collaborative Network.

Most cases of NCC included long-term migrants. Depending on where the cysticerci were, there were not many clinical differences. There were no set standards for the therapeutic regimen, and the treatment frequently did not follow the most recent recommendations. It is necessary to improve NCC case management in Spain, including physician awareness and laboratory capacity enhancements.

Research in the Field of Heart Diseases

Lead to future in Regenerative Medicine